Question: Who scored seven goals in a hockey game with former NHL players in October 2015?
Answer: Putin, who was celebrating his 63rd birthday, lead his team of retired NHL players to a 15–10 win over Russian bureaucrats and tycoons.

Question: Who said, “I don’t like to fight. I like to watch how others fight”?
Answer: Despite his physical play, Ovechkin informed Esquire in 2015 that fighting wasn’t his style.

Question: Who mused, “Why does the world dislike Russia? I do not think that we are unloved or considered to be ignorant”?
Answer: During an annual Q and A in 2013, Putin cited Russia’s cultural achievements as a reason for the world to have a higher opinion of his country.

Question: Who was the first Russian to carry the Olympic torch during its trip from Greece to Sochi, Russia, for the 2014 Winter Olympics?
Answer: “To be honest with you, it’s going to be [an] experience for all my life, and you know, I am proud to be Russian and proud to be here,” Ovechkin said at a ceremony in Greece in September 2013.

Question: Who was (most likely) the first to drink champagne out of the World Championship trophy that Russia’s national hockey team won in 2014?
Answer: At a celebration a few days later, Putin said to the team, “You remember how in the locker room on Sunday you offered me champagne? Well, now it’s my turn.”

Question: Who said of the conflict in Crimea in 2014, “I don’t want a war. Ukrainian and Russian people are close people and we have a war right now”?
Answer: Ovechkin posted a photo on Instagram in August 2014 that seemed, according to some interpretations, to express support for Russian-backed rebels fighting in Ukraine. He insisted that the photo was simply a statement against war.

Question: Whom, while being shown his office, did Joe Biden tell, “It’s amazing what capitalism will do, won’t it?”
Answer: Biden—who in 2014 told The New Yorker about the incident, which happened at the Kremlin in 2011—claimed that he then said, “Mr. Prime Minister, I’m looking into your eyes, and I don’t think you have a soul.” 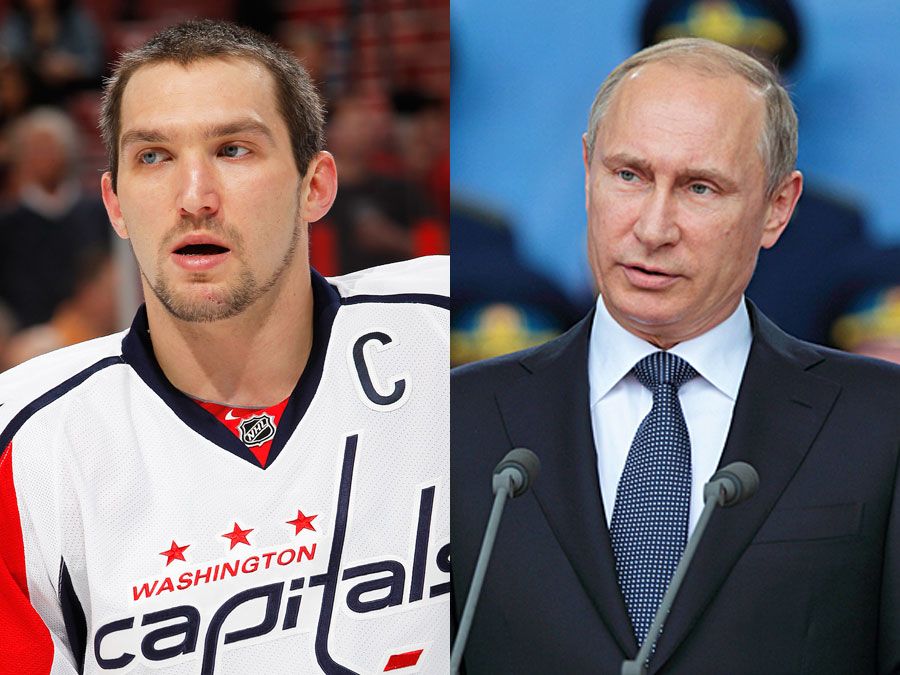 These two Russians might be harder to tell apart than you might think. Test what you know about hockey player Alex Ovechkin and politician Vladimir Putin with this quiz.

Sports & Recreation
An Encyclopedia of Sports

Technology
Gadgets and Technology: Fact or Fiction?
Browse All Quizzes
Your results
Question Question {{($index + 1)}}
Your Answer:
{{vm.state.responses[$index].isCorrect ? 'Your' : ''}} Correct Answer:
Are you a quizmaster?
Share Your Score:
Facebook Twitter
Compare your score
Max Score: {{vm.maxPoints}}
New Best Score!
{{vm.state.score|number:0}}
{{vm.communityAverage|number:0}}
Your Score
Community Average
High scores
Login or Join to track your quiz stats, save your best scores, and compete with the community!
Your preference has been recorded
Check out Britannica's new site for parents!