American saint
WRITTEN BY
The Editors of Encyclopaedia Britannica
Encyclopaedia Britannica's editors oversee subject areas in which they have extensive knowledge, whether from years of experience gained by working on that content or via study for an advanced degree....
Alternative Title: Elizabeth Ann Bayley

Britannica Explores
100 Women Trailblazers
Meet extraordinary women who dared to bring gender equality and other issues to the forefront. From overcoming oppression, to breaking rules, to reimagining the world or waging a rebellion, these women of history have a story to tell.

Elizabeth Bayley was the daughter of a distinguished physician. She devoted a good deal of time to working among the poor, and in 1797 she joined Isabella M. Graham and others in founding the first charitable institution in New York City, the Society for the Relief of Poor Widows with Small Children, serving as the organization’s treasurer for seven years. She had married William M. Seton in 1794, and in 1803 they and the eldest of their five children traveled to Italy for his health. Nevertheless, in part perhaps as an aftereffect of his bankruptcy three years earlier, he died there of tuberculosis in December.

As a result of her experiences and acquaintances in Italy, Seton joined the Roman Catholic Church in New York City in 1805. Herself now a widow with small children, she found it difficult to earn a living, and many friends and relatives shunned her after her conversion (the various anti-Catholic laws of the colonial era had only recently been lifted). For a time she operated a small school for boys. In 1808 Seton accepted an invitation from the priest (later bishop) Louis William Dubourg, president of St. Mary’s College in Baltimore, Maryland, to open a school for Catholic girls in that city. Several young women joined in her work, and in 1809 her long-held hope to found a religious community was realized when she and her companions took vows before Archbishop John Carroll and became the Sisters of St. Joseph, the first American-based Catholic sisterhood. A few months later Mother Seton and the sisters moved their home and school to Emmitsburg, Maryland, where they provided free education for the poor girls of the parish—an act later considered by many to be the beginning of Catholic parochial education in the United States.

In 1812 the order became the Sisters of Charity of St. Joseph under a modification of the rule of the Sisters of Charity of St. Vincent de Paul. Houses of the order were opened in Philadelphia in 1814 and in New York City in 1817. Mother Seton continued to teach and work for the community until her death in 1821, by which time the order had 20 communities. In 1856 Seton Hall College (now Seton Hall University) in South Orange Village, New Jersey, was named for her, and in 1885 the Sisters of Charity founded Seton Hill Junior College (now Seton Hill University) in Greensburg, Pennsylvania, in her honour. She was canonized in September 1975. 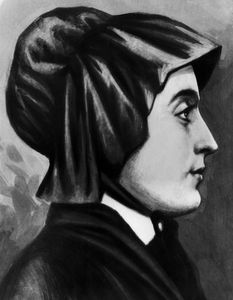